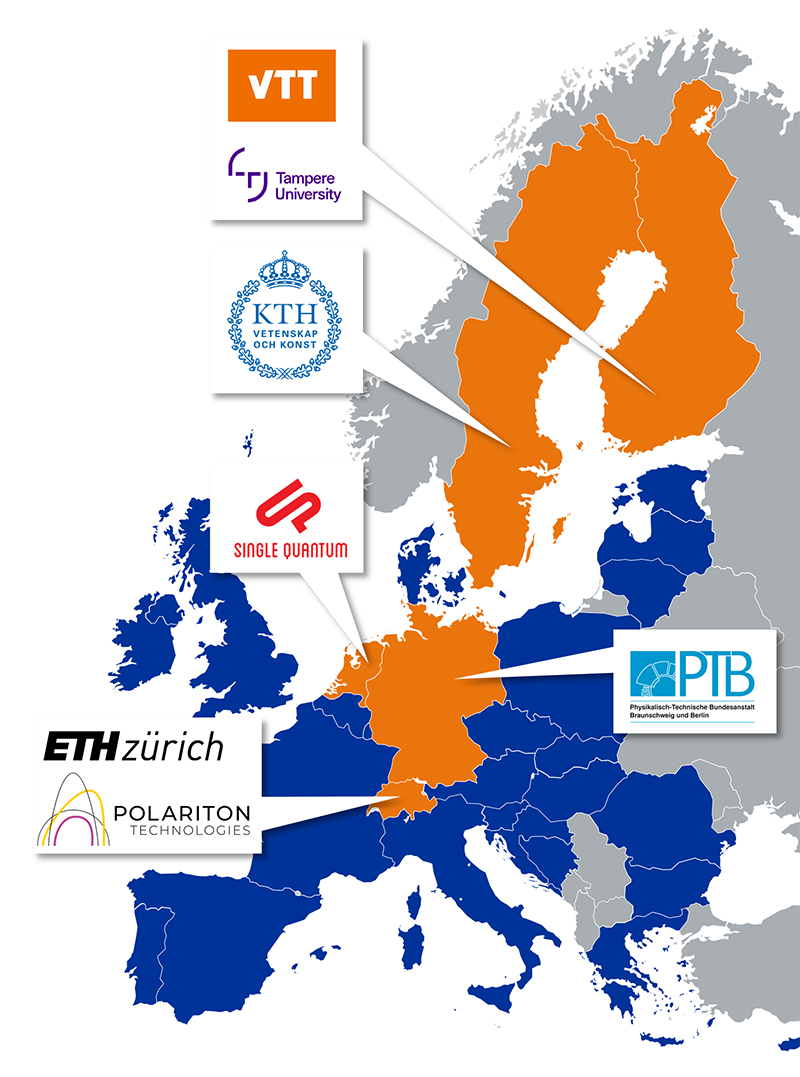 The consortium is built around VTT fab, which is one of the few foundries for SFQ devices in Europe, and is composed by world leading European quantum technology and microelectronics groups. The idea is to let ultra-fast and ultra-low-power SFQ processors communicate with the outside world by developing suitable cryogenic and room-temperature electro-optical interfaces. In the very same fab, VTT has also been pioneering silicon photonics (SiPh) since 1997, which, in the long term, will enable full monolithic integration of optoelectronic interfaces and SFQ processors. VTT plans to give open access to the technology extending their MPW offer – presently limited to SiPh only – also to include superconducting devices. The VTT team also includes the electrical metrology group (part of MIKES, the national metrology institute of Finland), which has developed a system to generate fast and accurate arbitrary electrical pulses by optical means. Prof. Leuthold’s group (ETH) is the world leading group in guided-wave plasmonic devices: they have recently reported record high-speed SPP-PDs and SPP-EOMs (up to 500 GHz) with demonstrated sub-fJ energy per bit, and they expect suitably designed modulators to achieve much better than that. With these successful demonstrations, Polariton Technologies was founded as a spin-off  and continues the work on the SPP-EOMs to bring them towards commercialization. ETH and Polariton have in-house capabilities to design, fabricate and characterize the devices, also potentially in cryogenic environment. Prof. Val Zwiller’s group (KTH) is world leader in quantum nanophotonic devices and single-photon detectors with in-house expertise of design, fabrication, and cryogenic optoelectronic characterizations. Prof. Zwiller is also a co-founder of Single Quantum, a world leader company of cryogenic single photon detectors, whose expertise is of fundamental importance to develop ultra-sensitive OE interfaces and for the assembly of cryogenic demonstrators. Single Quantum and KTH also bring a clear path to short-term exploitation of aCryComm results. Prof. Mircea Guina’s group (ORC, Tampere University) is a world leading group in the development of novel III-V optoelectronic devices, including more conventional devices for room and high temperature operation but also unconventional nanodevices expected to operate at cryogenic temperatures and with ultra-low power consumption. Finally, Mark Bieler’s group at PTB will bring their world-class expertise in the analysis of fast electro-optics signals to characterize and refine the devices developed in the project.

VTT is a state owned and controlled non-profit limited liability company established by law and operating under the ownership steering of the Finnish Ministry of Employment and the Economy. VTT’s activities are focused on three areas: Knowledge intensive products and services, Smart industry and energy systems, and Solutions for natural resources and environment. VTT is impact-driven and from its wide multi-technology knowledge base, VTT can combine different technologies, produce information, upgrade technology knowledge, and create business intelligence and value added for its stakeholders. As 31 December 2019 VTT had a staff of 2,103, and total revenue of 245 M€. Over the years, VTT has gained vast experience from participation in numerous European R&D Framework Programme projects and within various thematic programmes. VTT is ranked among the leading European Research and Technology Organisations (RTOs).

Tampere University of Technology (TUT) and the University of Tampere (UTA) were merged on 1 January 2019 into a new multidisciplinary foundation-based Tampere University (TAU). TUT has been a pioneer in technology transfer and an acknowledged cooperation partner among the scientific community and business life. UTA is known as multidisciplinary university focused on teaching and research in fields of society and health. Together TUT and UTA have now created Finland’s second-largest university, which priority areas are technology, health and society. Photonics has been a prominent area of research and education at TUT for more than 20 years; recently has been profiled as a strategic development direction by the Finnish Academy enabling to increase the research community to 10 different research groups from fundamental optics, to technology, and applications.

TAU will be represented by the Optoelectronic Research Centre, a leading III-V optoelectronics research group in Europe, with more than 30 years of continuous activity centered around molecular beam epitaxy (MBE). The strategy of ORC builds on multidisciplinary integration of material science, epitaxy, fabrication of novel III-V photonic heterostructures and devices, all the way to applications and entrepreneurship. With 5 operational MBE reactors we can fabricate a wide range of material systems based on GaAs, InP and GaSb covering a spectral domain from 600 nm to 3 µm. The combined expertise in epitaxy and processing technology has enabled achieving important milestones in the development of optoelectronic devices and has been instrumental for creation of semiconductor laser industry in Finland (currently there are 10 spin-offs from ORC active in the area of laser and semiconductor technology). ORC team comprises about 30 researchers covering a diverse projects portfolio, with external funding of about 2.5M€ /year, spanned over basic science, applied research, and industrial collaboration. One major area of the activity is concerned with the development of semiconductor lasers, amplifiers, and modulators for photonic integration, in particular addressing new wavelengths, un-cooled operation, and reduced complexity for integration. Other major areas of research at ORC are targeting epitaxy of nanowires, nanoscale light sources, development of lasers for medical and 3D sensing applications, and the development of ultra-high efficiency multijunction solar cells.

Single Quantum is the market leader in the emerging field of superconducting single photon detectors. The company was created in 2012 as a spin-off of Delft University of Technology: a positive example of how excellence in science can be translated into a successful business. Single Quantum designs, builds and commercializes single-photon detection systems based on superconducting nanowires. Since its start, the company has built an impressive track record in entrepreneurship, high quality manufacture, innovation and engineering. Single Quantum photon detection systems have already been installed in universities, research institutes and industrial research labs all around the globe. Our customer list features Toshiba Research Labs, Hamamatsu Photonics, Huawei, the United State Air Force, Los Alamos laboratories, for a total of more than 100 academic and industrial labs all over the world. A strong market pull for this emerging technology, reflected in a continuously growing turnover that more than doubled every year since 2013. Accordingly, Single Quantum is growing its team with highly specialized employees, currently 18 fte, and investments in technical equipment and production facilities. In order to accelerate further growth, Single Quantum has been awarded the very prestigious SME instrument phase 2 grant from the European Commission, that is supporting disruptive innovation in small businesses that have significant growth potential and global ambitions. In addition, Single Quantum is participating in the Quantum Flagship, a 1 B EUR initiative from the European commission to boost quantum technology and realize its application in society.

The Physikalisch-Technische Bundesanstalt (PTB) is the National Metrology Institute of Germany. PTB’s mission includes the determination of fundamental and natural constants, the realization, maintenance and dissemination of the legal units of the SI, and safety technology – supplemented by services such as the German Calibration Service and metrology for the area regulated by law, for industry, and for technology transfer. As the basis for its tasks, PTB conducts fundamental research and development in the field of metrology in close cooperation with universities, other research institutions, and industry. PTB ranks among the worldwide leading institutes of metrology; a total of approx. 1900 employees work at PTB.

aCryComm tasks will be conducted in PTB’s Electricity Division, which is in charge of the realization and dissemination of the electrical and magnetic units. To this end, the Electricity Division develops precision electromagnetic measurements, which are based on electrical quantum metrology and quantum standards. Nanotechnology is employed for the in-house fabrication of superconducting and semiconductor quantum circuits. Moreover, fundamental studies of quantum effects in condensed matter are pursued laying the groundwork for the electrical metrology of the future.

KTH (Stockholm) is Sweden’s largest and oldest technical University; it plays a central role in Swedish research and is active in a wide range of European and International collaborations. Research infrastructures include advanced clean rooms for nanofabrication, semiconductor growth and processing. KTH has a deep tradition in information technology and has set nanoscience as important areas for future growth. A particular strength of KTH is the combination of top-level experimentalists (with well-equipped labs for nanofabrication and quantum optics) and theorists (Nordita, the Nordic Institute for Theoretical Physics is on the KTH campus and hosts nearly one hundred theorists).

The KTH group involved in aCryComm has extensive experience in nanofabrication of quantum devices as well as in performing quantum optics experiments at the single photon level in cryogenic environments. The KTH laboratory optimized for optics at the single photon level and cryogenic temperatures will be made available for the project. Five cryostats, three pulsed tunable lasers as well as spectrometers and single photon detectors are available for this project in the Zwiller lab. In addition, the Zwiller lab has full access to a state-of-the-art nanofabrication laboratory with a dedicated sputtering system for NbTiN superconducting thin films, electron beam lithography and etching systems.

ETH Zurich, Switzerland, is one of the top ranking international universities in the fields of engineering, technology and natural sciences. ETH has 530 professors and 20’000 students – of which 4’000 are doctoral students – that are engaged in learning, teaching and research. Since its foundation in 1855 ETH brought forth 21 Nobel prize winners. The Institute of Electromagnetic Fields (IEF) is led by Prof. Leuthold. The institute researches the wave and particle characteristics of electromagnetic fields at all frequencies and how to exploit the properties for various applications. A strong focus lies on high-speed optical communications by developing novel modulation and photodetection schemes enabled by silicon photonics and plasmonics. Further research includes beam forming, pulse shaping, Tbit/s transmission systems and mid-infrared sources and detectors.

The IEF has its own software library and servers for various types of simulations and maintains several state-of-the-art labs both at ETH as well as at the IBM Rüschlikon site, where the IEF is a member of the Binning and Rohrer Nanotechnology Center (BRNC). The institute has full access to the cleanroom facilities at the BRNC and in addition, it has access to the “First Lab” at ETH Hönggerberg. The group’s labs at ETH include a characterization lab, which is equipped with 3 and 5 axis nano-stages, microscopes, various lasers, attenuators, amplifiers, optical spectrum analyzers, a complex spectrum analyzer, fiber splicers, a spectra physics femto-second laser, electrical network analyzers and synthesizers and a cryogenic probe station. The second lab, the system lab, is equipped with an Agilent Arbitrary Waveform Generator (64GSa/s), Xilinx FPGAs and an Agilent N4391A modulation analyser, which enables generation of Tbit/s traffic, electrical waveforms at up to 80GSamples and receiving with a 63 GHz bandwidth and 160 GSa/s sampling.

Polariton Technologies Ltd., Switzerland, specializes in new photonic and electronic technologies for the testing, sensing, and communications market. The company develops, manufactures, and sells chip-level and packaged devices as a solution for broadband interfaces between electrical and optical signals. The core technology of the company is plasmonics that allows for the signal conversion of microwave signals (of at least up to 500 GHz) to optical signals while ensuring compact and energy-efficient operation. Polariton Technologies Ltd. was founded in February 2019 as a spin-off of ETH Zurich, Switzerland. The company is located in Rüschlikon, Switzerland.